Stigma is defined as “an attribute or quality which ‘significantly discredits’ an individual in the eyes of others”.

What are the consequences of stigma?  Stigma discriminates, it isolates, it disconnects people, it has a significant impact on the quality of life, it delays treatment, it can kill people.  Research has demonstrated that substance use disorders are more highly stigmatised than other health conditions.

I previously wrote about the ‘hidden epidemic’ and how the vast majority of those dying in the opioid crisis are men dying in houses (stats show as much as 80% of deaths), these are men using substances alone.  In that article I talked about how I fit that ‘statistical model’ perfectly and that’s it’s truly a miracle that I’m still alive.  What kept me ‘hidden’?

As difficult as it may be to admit, I saw my ‘high-functioning’ addictive behavior as somehow better than those who were homeless.  Somehow I’d managed to always keep a job and a roof over my head.  While this speaks to my ego, clearly I was deceiving myself to feel better about myself.  It also speaks to the issue of stigma.  Street level resources such as Opioid Clinics (MAT) clinics, drop-in’s, shelters, our community services substance use center these resources I viewed as somehow beneath me.  I was fearful of being seen there, and did not want to find myself associated with the people who used those services.  Additionally and worth noting, I was not the kind of person who would ever make use of a safe consumption site (SIS/SCS).

Fast forward to today and obviously I realize I’m no better than anyone else.  I could have very easily ended up homeless and in far more dire circumstances than I ended up in.  Stigma in many ways contributed to keeping me hidden.

Years ago I was sharing my story publicly and afterwards a woman approached me with a compliment saying “Wow, you must have really changed I can’t picture you as a drug addict”.  Umm, thanks.  It took some time but in reflecting on this I understood her intention to compliment was based on a stereotyped image of what a drug addict should look like.  Here I was, well dressed, looking composed, and this woman can’t imagine associating the present outward me with the past hell of addiction I described in my story.  Reality is however that I didn’t really look much different from my past addicted self.  Even in the depths of addiction I made every effort to appear on the outside like I had it all together.

The Media contributes to Stigma

Unfortunately society has long formed a stigmatised image of what a drug user should look like, or could end up looking like.  The media has been complicit in this and they still are, they love to blow stories out of proportion and sensationalize.  Worth a listen is this podcast from On The Media about the American War on Drugs in which they investigate how poorly some media outlets have reported on recent drug scares (such as the bath salts scare).

I live in Metro Vancouver where the infamous downtown East side one of the city’s oldest neighbourhoods is “notorious for its levels of drug use, poverty, mental illness, sex work, homelessness and crime.  It is also known for its strong community resilience and history of social activism.” (Excerpt taken from wikipedia)  Whenever publishing content on the opioid crisis or addiction in general the media inevitably uses imagery from the downtown east side in their story.

Moms Stop The Harm an advocacy group in Western Canada recently addressed this issue in a recent facebook post written as an open letter to the CBC (Canadian Broadcasting Corporation).

“Thank you for your most recent article that draws attention to the tragic numbers lost to overdose in 2017.
However, we need to once again ask that you create imagery in your news articles that better aligns with substance user groups as a whole.

Our network efforts are focused on reducing harms by reaching all of those at risk of overdose. When we fail to align our efforts with a true representation, we feed into the stigma that isolates the communities belief that drug use / misuse thrives in a stereo typical group. Most don’t want to believe that their loved one could die by overdose let alone use drugs that put them at risk.

We need greater communication across this country if we want to save lives. As a national news agency your opportunity to save lives should be first driven by a responsibility for fair and balanced reporting – in this case we feel that efforts like the over used image of a discarded needle is for shock value and put you in a media world that applies sensationalism to their efforts above truth.

Sincerely we ask you change this. Too many of us have lost children by casual drug use. We want to ensure other families are given the opportunity to understand the risk their children are in and we hope prevent them from living with the incredible pain of losing a child. ” (original facebook post, here)

The media’s portrayl of homeless people, virtually always picturing people who are IV drug users, are NOT an accurate picture of the people who use drugs OR what the statistics around the deaths of people in the overdose crisis represent.

How can we respond to & change stigma

First we need to look at our language.  I’ve made the strong effort to switch to people first language.  Some of the changes are subtle, but they are not insignifcant.  Instead of saying drug addict (which highlights behavior) we could say a “person with a drug addiction” which humanizes the individual and draws our attention to the fact that they are a real person!

For decades we’ve been using language that alienates people from society at large.  Deeming them somehow as less than or unworthy.  Terms like ‘junkie’, ‘drunk’, ‘crackhead’, ‘tweaker’, only reinforce the destructive nature of a persons behavior, driving them away from healthy connection.  No person on earth is a sum of their behaviors.  Using these words dehumanizes people, separating them from society.

The Recovery Research Institute recently conducted a study in which one person was referred to as a “substance abuser” and a second person referred to as “having a substance use disorder”, no further information was given about these hypothetical individuals.  The study discovered that the substance abuser was, less likely to benefit from treatment, more likely to benefit from punishment, more likely to be socially threatening and more likely to be blamed for their substance related difficulties.  The results of this study are clear, it “suggests that the words “abuser” and “abuse” can evoke automatic negative thoughts about individuals with substance-related problems”. 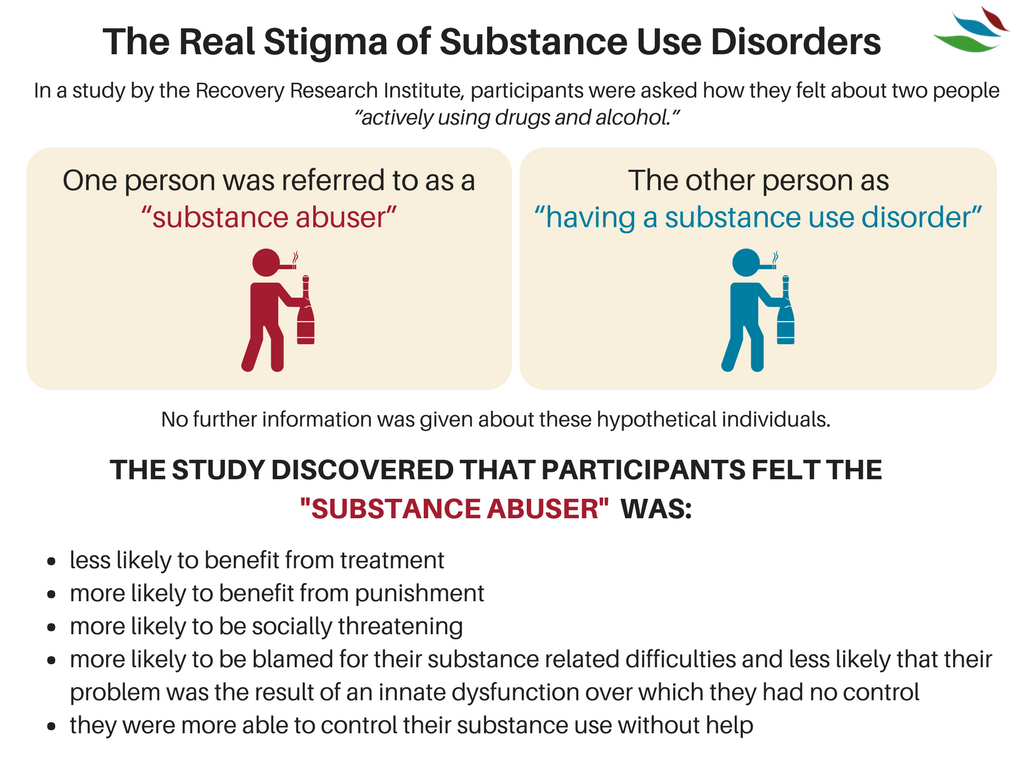 When talking about recovery I often used the language ‘clean time’ and while it sounds like an accomplishment when describing someones journey out of addiction the very word clean has a negative implication in that, if you’re clean now, what were you before? DIRTY?  I’ve dropped this from my speech and now simply say ‘substance free’.  While it doesn’t seem like much, the psychological implications are significant.  If a lapse occurs an individual may spiral further due to negative beliefs about themselves tied to the language they’ve used to describe themselves.

We need to help people RECONNECT

Johann Hari talks about the opposite of addiction being connection in his Ted Talk (you can find it here along with a dozen other amazing TED talks on addiction).  Our goal needs to be to help people find healthy connections again.  If our language is contributing to disconnection than not only are we failing to help, we are actually contributing to the problem.

I’m proud of our local health authority (Fraser Health) who has recently launched an anti-stigma campaign to assist in changing the publics perception.  People who use drugs are REAL PEOPLE. 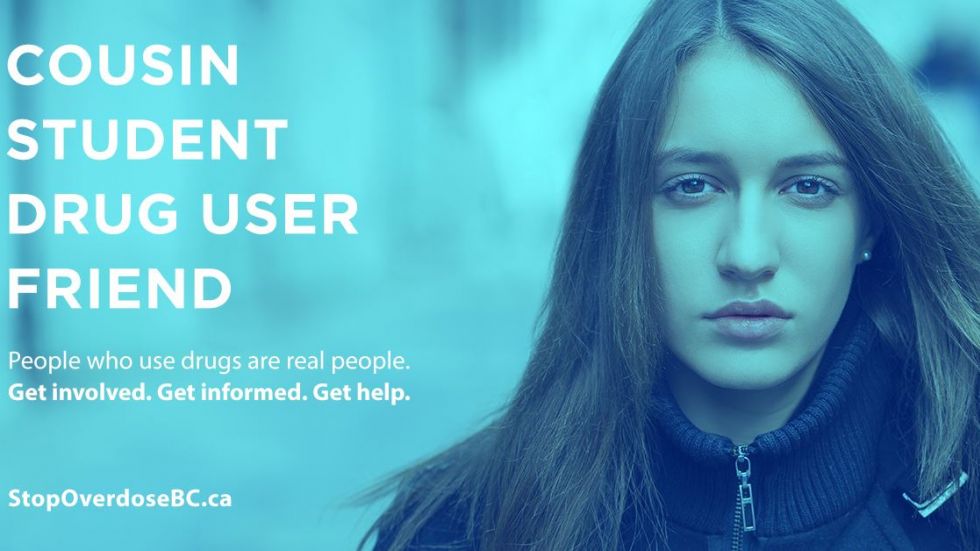 Thanks for reading, I’d love to hear from you in the comments.
You can also hear my interview on the Addictions Podcast by clicking here, “Stigma & Language” with David Wagner.

6 thoughts on “Thoughts on Stigma & our language around addiction”