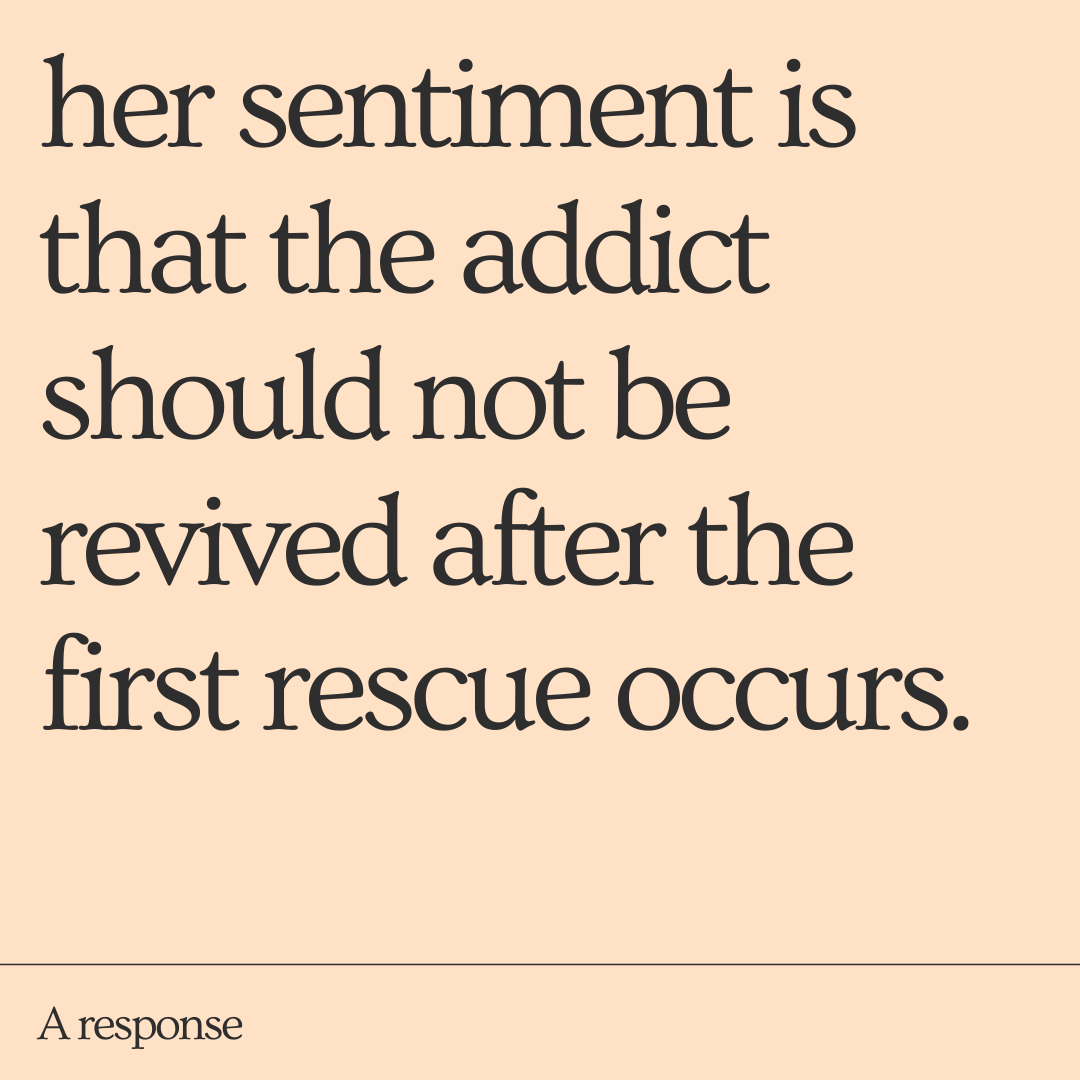 I recently was asked to help a friend respond to a person who wanted to confront someone with a very harsh and stigma heavy perception of overdoses, firstly here’s what they wrote to me…

“I have a situation I am not sure how to handle.  We have friends whose teenage grandson has severe rheumatoid arthritis.  This young man hurts all the time.  Blessedly his parents are able to pay for his treatment, but it is $2000/month just to help him feel some relief.  His grandmother is really upset that an addict(sic) can get several doses of the drug (naloxone) that keeps them from dying because they overdosed while her grandson who did not choose this agony for himself cannot get his medication paid for. Basically, her sentiment is that the addict should not be revived after the first rescue occurs. I understand that these are two different situations drug payment wise. But I get her frustration. Can you speak to her situation? What could I say to her about this that might make some sense?“

Disappointingly, this sentiment isn’t super uncommon.  The frustration the grandmother is feeling here is genuine.  What appears to be happening is that the grandmother is looking for a scapegoat to expedite her frustration.  Someone should be blamed.  To me it seems that this is an overlap of the anger & bargaining stages of grief.  The person is genuinely upset about the unfairness of a grandchild’s pain, this makes sense.  When bargaining in a grief state, rational arguments tend to be left aside in place of emotional arguments.

One of the sad realities of our society is that people with addictions (let’s clarify here, people with addictions to illegal substances) have in many ways become a socially expendable & marginalized minority.  Us & Them.  Because of the intense stigma around most substance use disorders it’s easy for individuals who haven’t themselves struggled with an addiction or had an immediate family member struggle with addictions to feel a sense of superiority over those that do.  There’s also a strong emotional connection to the grandchild and no obvious emotional connection to individuals dying of overdose. By keeping ‘people like that’ at a distance it is easier to dehumanize them and come to conclusions that their lives don’t have the same value.

Our team put together a video called “How we can reduce stigma & save lives by showing compassion to people with addictions” which addresses some of these attitudes and how we can humanize people instead of reducing them.

There is also the problem of fairness here.  It clearly seems to anyone very unfair that the grandson suffers and this desire for fairness has the consequence of motivating a person to search for things that to them appear unfair.

Here’s where I see problems with this individuals perceptions.  They are conflating two totally unrelated things.  The similarities: The grandson’s medical condition and the struggles of someone with addiction are both huge difficulties that affect the individual and those around them (family & loved ones).  The only thread this person is using to tie them together is the idea of choice.  This reveals an inherent flaw in their understanding of addiction.

One must understand that virtually NO fatal overdoses are intentional. They would be better described as accidental poisonings by a toxic drug supply. Fentanyl is a by-product of prohibition, essentially it is here because of an axiom called the “iron law of prohibition”.

To suggest that individuals who are dying are dying BY CHOICE is naive & ignorant. Even if addiction was the primary driver here (and it’s not necessarily), people aren’t addicted entirely by choice.

Yes, I do personally believe it’s a learned behaviour and don’t subscribe fully to the disease theory which seems to remove personal responsibility from addiction… however it’s not as black & white as some may think.

Take for instance an individual who has over time developed a dependence and then an addiction to a substance. While choice played a role in that process, in the end the resulting addiction no longer feels like a series of choices, rather we are talking about a disconnected individual who is now in a habitual pattern in which supports to change often feel distant or impossible to reach. Society does a terrible job at connecting with that individual and opening up avenues for that person to reconnect with themselves and society at large (take for instance attitudes implying that people who overdose should not be revived, not a unique belief) a socially contagious attitude like this actually contributes to the alienation of individuals who are struggling with addiction. This condemnation of them and the superior attitude with which they are judged creates a scenario in which they feel further stigmatized and isolated.

Choice may well be available. The choice to change may well exist. However, if you picture it like a tug of war where on one side all the compounded difficulties, traumas, shame, guilt, isolation, perhaps criminal penalties, debt, destroyed relationships etc have piled up over time, those heavy things are tugging that person to stay in their addiction. The substance serves a purpose, and that person feels the consequences of their behaviour are worth the relief they feel from using their substance of choice. On the other side are healthy relationships, good people who have hope & see the best in that person, potential, future opportunities, etc… these things are pulling towards a better life, free from addiction. Which side do you think is pulling stronger? Does it still feel like a choice?  Which direction would your own attitudes pull this person?

Worth watching: Johann Hari’s Ted Talk “everything you know about addiction is wrong

Addiction is a coping mechanism that a traumatized individual is using to handle emotional (and possibly physical) pain.  The consequences of the addictive behavior in the eyes of the addicted individual are less than the consequences of facing that pain.  This is highly over-simplified and my recommendation for understanding this deeper is to read Gabor Mate’s book In the realm of Hungry Ghosts.

This person also has a very incorrect perception of overdose.  As I’ve already stated above overdose’s are accidental.  People don’t want to overdose.  The drug supply has changed over the last 5+ years in North America with the introduction of fentanyl to the supply & the cross-contamination of fentanyl into non-opioid substances, individuals who use any of the illicit drug supply are at a level of risk for overdose that has never existed in history.

One of the position’s the grandmother takes here is that an addict should only be revived once (and then left to die if they overdose again). One, of many problems with this line of thinking is the belief that only people with addictions are using drugs.  Interestingly 90% of substance use is free of addiction.  Most individuals who occasionally and recreationally use drugs like MDMA, cocaine or opioids without life altering problems or impact on their relationships, finances or personal health are now finding themselves at risk of overdose due to the changing and toxic drug supply.  Overdoses would not happen if individuals using substances could use known quantity and quality.  For instance people feel comfortable consuming from a regulated alcohol market because they have confidence in knowing what is on the label is what is inside the bottle.  How do you know if the person who overdosed is an “addict”?  You don’t and you can’t.

The idea of valuing one persons life over another is highly unethical.  I see this as more about a judgment on the type of addiction (illegal drugs) as opposed to other addictions such as food, sugar, alcohol, sex, pornography, video games, cell phones, social media, Netflix etc. There are a lot of examples that could be presented here.  An overweight and extremely unhealthy person could have a heart attack as a result of their lifestyle.  If they are revived and receive heart surgery with the advice of changing their lifestyle, but choose not to.  Should they be left to die when they suffer another heart attack?

Injectable naloxone isn’t all that expensive and is an ethical and moral obligation of government.  Who is to say that this individual who has accidentally overdosed doesn’t have value?  Do you really want to be the one to decide if someone lives or dies?  If you encountered an overdose on the street and you held in your hands the power to save that person, you would stand by and watch them die instead?  I would highly recommend the Ted Talk of Guy Felicella who overdosed (died!) six times but is now an amazing advocate and counsellor.  Could you imagine empowering yourself to have decided that he was not worth saving on the second, or third, or fourth or fifth time?

I don’t want to undervalue the pain & significance of what the grandchild in this scenario is experiencing.  The fact that his family needs to shell out $2,000/month to pay for medications for him is sad and for most people probably out of reach, it may be crippling the family financially or limiting their future opportunities, witnessing his suffering is surely taxing emotionally and something that anyone close to it will be wrestling with the existential question of why.  Projecting that why onto a scapegoat is  a red herring and a false dilemma.  Life is suffering and it’s not fair.  My biggest concern with scenarios like this is that the bitter judgment projected by the grandmother becomes a resentment adopted by the child.